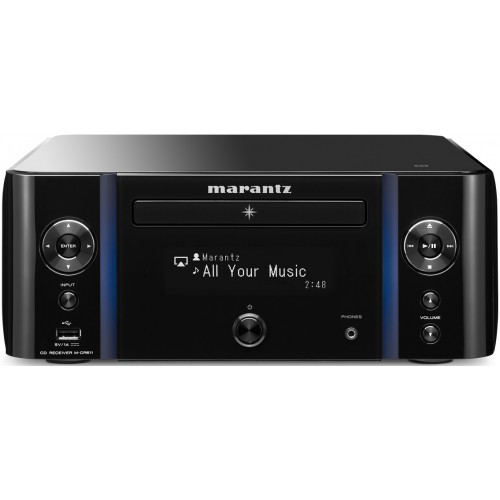 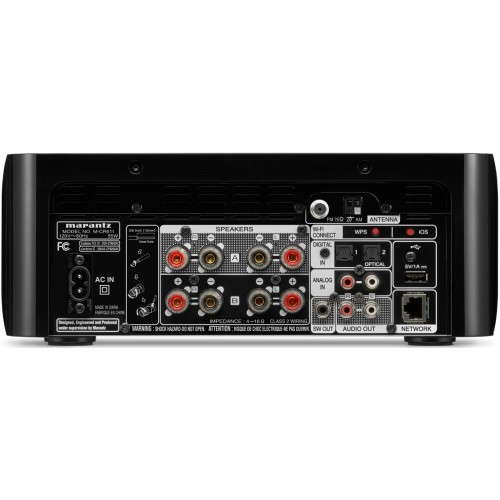 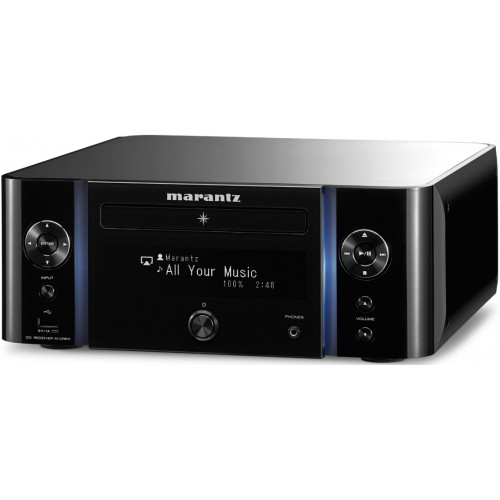 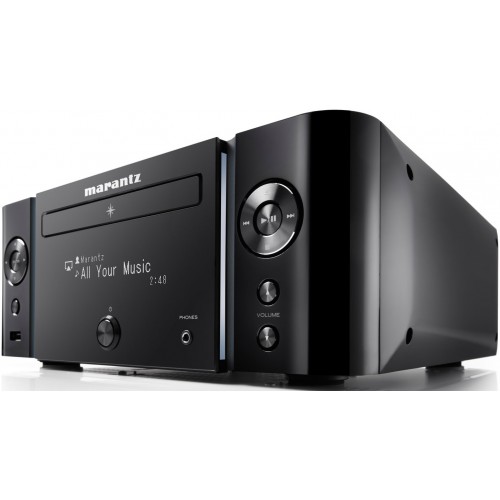 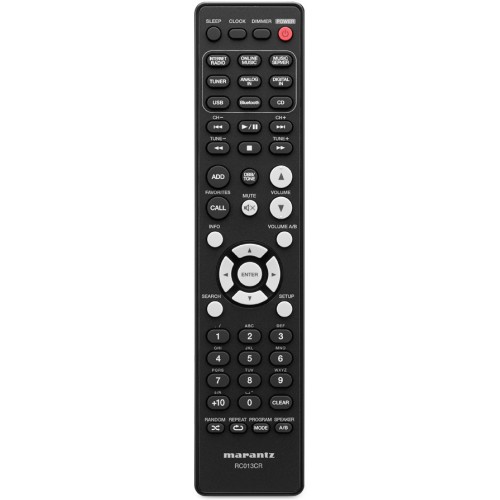 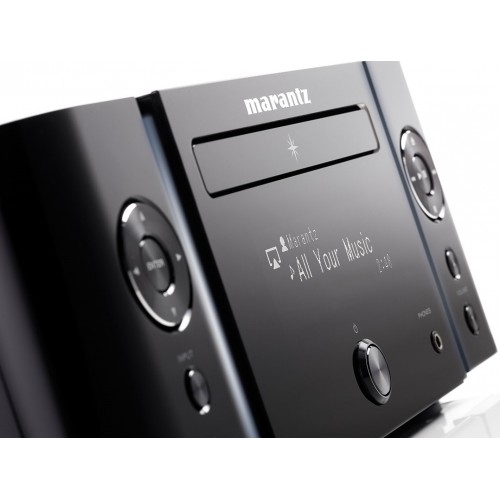 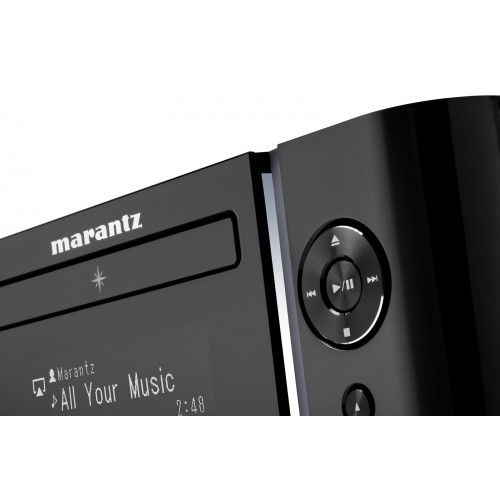 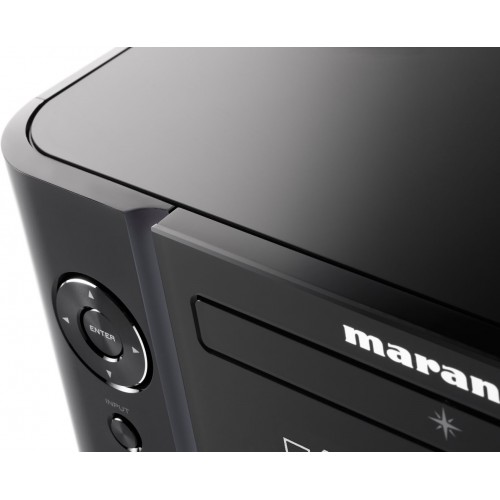 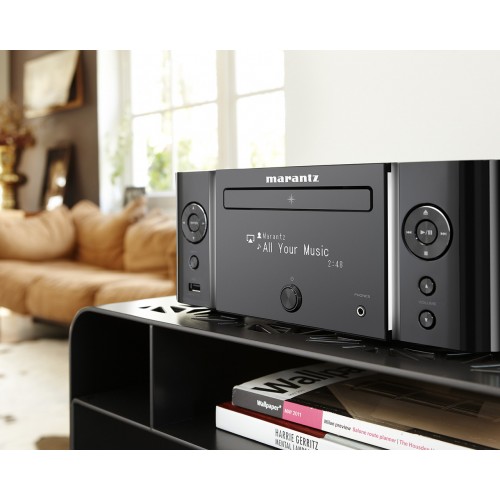 Featuring a broad range of listening and streaming options, the Marantz M-CR611 Network CD Receiver is now equipped with both Bluetooth and Wi-Fi wireless audio streaming functions including Apple AirPlay, and features popular streaming services including Pandora, SiriusXM and Spotify, along with delivering thousands of internet radio stations from around the world.

The M-CR611 features a built-in disc player that's compatible with music CDs, CD-R and CD-RW recordable and erasable discs and is also equipped with an AM/FM tuner.

Featuring 4 high efficiency digital audio amplifier channels, the M-CR611 lets you connect 2 pairs of loudspeakers, and now features the ability to control the volume level of each speaker pair independently. You can also configure the M-CR611 to drive 1 pair of speakers with double the power output, or drive a pair of bi-amp compatible audiophile speakers.

The M-CR611 comes with a deluxe ergonomic remote control and is fully compatible with the Marantz Remote App, which is available in iOS and Android versions.

Featuring dual diversity antennas, the M-CR611 lets you stream your favorite audio tracks wirelessly via Wi-Fi and Bluetooth. The dual diversity antenna system ensures stable streaming even in congested urban environments, and the Wi-Fi function features 802.11 b/g/n technology for compatibility with the widest range of smart devices. The Bluetooth function includes NFC pairing by simply touching your device to the "N" logo on the side panel, and the M-CR611 also features quick and easy push button Wi-Fi Protected Setup and simple iOS Wi-Fi sharing.

A World of Internet Streaming Options

Enjoy a huge selection of music from popular streaming services including Pandora, SiriusXM and Spotify, as well as listen for free to any of thousands of internet radio stations from around the world.

Enjoy your favorite tracks from your iTunes library on your PC or Mac or stream them wirelessly via AirPlay from your iPod touch, iPhone and iPad.

Featuring 4 channels of high efficiency, low distortion digital audio amplification, the M-CR611 can be configured to drive 2 pairs of loudspeakers with independent volume control for each pair, and can also be configured to drive a single pair of speakers with double the output power. You can also connect a pair of audiophile bi-amp compatible speakers. And, the M-CR611 is fully compatible with low impedance speakers, including 4 ohm models.

For the widest range of control and connection options, the M-CR610 supports a broad array of sources, including Windows 8/8.1, RT and Windows 10 devices, and iOS and Android smartphones and tablets. It's also DLNA 1.5 Certified for connecting to a PC or NAS drive on your home network.

The M-CR611 comes with a deluxe ergonomic remote control, and you can also easily control it with your favorite iOS or Android device via the Marantz Remote App, which also lets you select one or both pairs of speakers to suit your listening preferences.

Via either of the available USB ports, you can directly connect your iOS device to the unit and stream tracks directly while your device will recharges at the same time. When the unit is in standby mode and your device is connected, the recharging function is still active, and once the device is fully charged, the M-CR611 automatically goes into deep standby (lowest power consumption) mode.

Connect your digital TV or cable/satellite set-top-box and a Blu-ray or DVD player to either of the 2 digital audio inputs and enjoy full dynamic range digital audio playback of your favorite movies and TV shows.

The compact chassis lets you place the M-CR611 just about anywhere (home, office, den and dorm) and features upgraded cosmetics with a durable acrylic top plate cover along with deluxe front panel vertical lighting accents that feature selectable LED colors including White, Green, Orange and Blue (or Off, if you prefer).