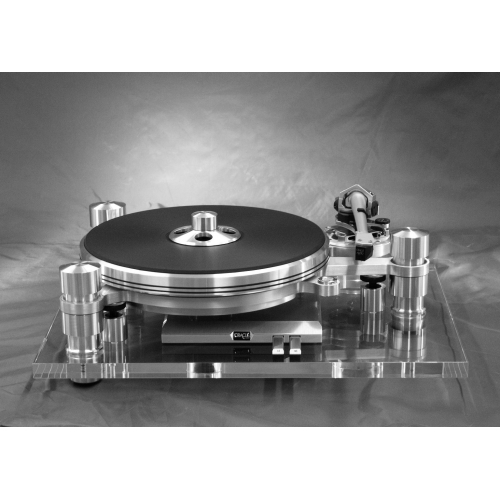 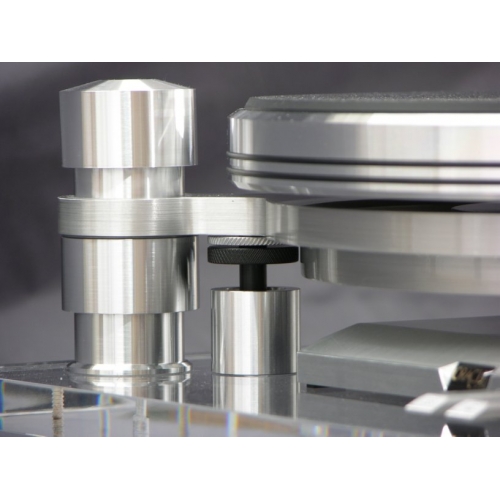 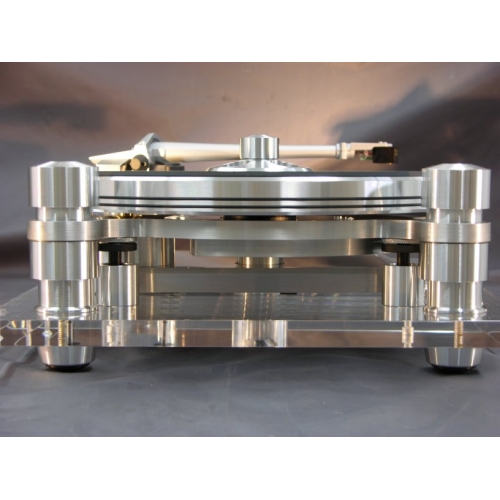 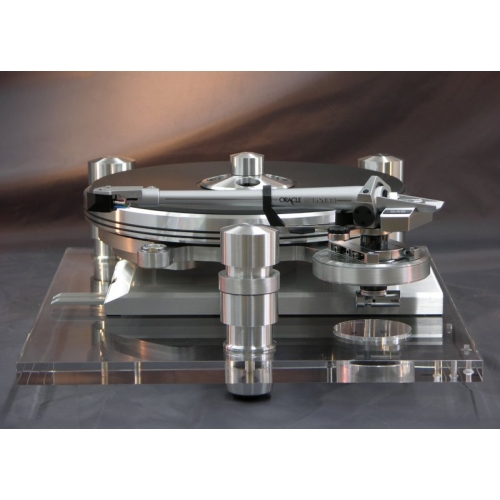 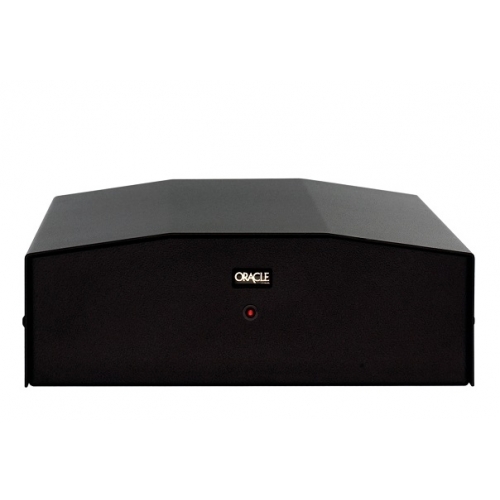 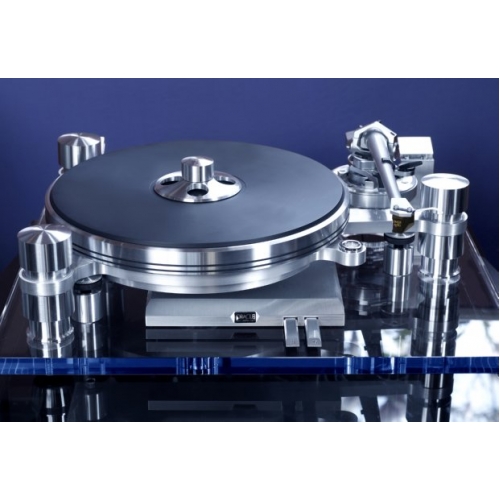 Since 1979, Oracle Audio has been producing state-of-the-art stereo components. Oracle's first turntable, the AC model, introduced new features and technologies to the analog world. Oracle's Delphi Mk I was introduced in 1980. The new Delphi Mk VI is the sixth generation of the Delphi's line heritage. Through the years the Delphi won numerous prestigeous awards and it has been accalimed worldwide! The Delphi Mk VI was awarded the Analog Grand Prix 2010 Gold Award from Japan, more recently Enjoy the Music.com's Best of 2014 Blue Note Award. To this day the Delphi is still Oracle's flagship product and still serves as a reference in the analog community!

Using the finest components and design technologies, the Oracle Delphi Mk VI is exquisite in all aspects. Like its predecessors the Delphi MK VI is supported by three suspension pillars to efficiently control unwanted vibrations. It harbors a massive belt-driven platter that uses a center clamp system first introduced by Oracle back in 1979. The Delphi's floating chassis, milled from solid billets of aluminum, is an extremely rigid and inert structure supporting the tonearm and the platter. While the fabrication process of the Delphi is one of minute precision its developement process is one of science and emotion; to bring out all of the music's depth and detail. Truely the Delphi Mk VI is a work of art!

"With the improvements in the bearing, and especially with the addition of the silicone damping system, the Mk.VI edition not only retains the Oracle Delphi’s position as one of the most beautiful turntables in the world; it reestablishes it as a formidable contender in and well beyond its price class."

The global concept of the new Oracle Delphi MK VI, now in its 35th year, was developed around the control of micro vibrations and micro calibration. The micro vibration can be introduced from the inside as well as from the outside. We have to understand that the micro movement of the phono cartridge stylus is extremely vulnerable when capturing the minute deviations from the record groove. At the same time this stylus is extremely powerful because it sends through the system a vibrational energy that can and will stimulate other vulnerable components. This will also translate into resonances.

How can it happen ?

Resonances generated by the tonearm bearings and the tonearm tube will go back all the way to the stylus and induce a coloration that is in no way related to the music being reproduced. Tonearm bearings play an extremely important role in the quality and integrity of the signal reproduction. Any micro movement within the tonearm bearings will also translate into a mechanical cancellation ( two objects moving simultaneously in opposite direction). This means that the stylus will not capture all the micro signals engraved in the vinyl recording.

When we think about the vibrational energy generated from the outside of the record player it is extremely difficult to identify all the sources that can effect the system but it is possible to regroup most of them into 3 categories: electrical, mechanical and acoustical. I will not address the electrical aspect here. For the other two categories the best option would be to completely isolate the player from the sound room in order to protect it against the sound pressure level. As for vibration, the use of an extremely massive platform would help keeping the unwanted mechanical energy outside of the picture. This would not be realistic and certainly not aesthetically successful ! The magnetic isolation can be a solution but at the same time it can be a significant part of the problem.

What changes have been made to the drive modules?

The Delphi MK VI is a work of technical development and design aesthetics. As far as the drive module is concerned we made a cosmetic change. It is a design consideration to reach the visual balance of the new MK VI. There were no changes made to the Mk V drive electronics and the reason is simple: the MK V electronics system is very advanced and well balanced and there was no need to modify it other than for aesthetic considerations. For the past 20 years we have been using a synchronous motor. The MK VI makes no exception as it is the best drive system available!

What is the influence of the bigger sub-chassis on the performance of the MK VI ?

By making the sub-chassis larger we further improved the weight distribution to offer a better overall balance and adaptability for many different tone arms configuration. The previous MK V sub-chassis was slimmer, although larger than the previous models, however we needed to add a massive counterweight below the platter. With the MK VI this counterweight below the platter has been removed but we still felt we needed to bring more mass to the front left suspension system for better rigidity, mass coupling and resonance control. By making the sub-chassis’s central section larger we simultaneously reduced the length of the legs going to the suspension towers. We also increased the rigidity of the tonearm mounting section by widening the tone arm mounting ring support by about 35 percent.

How does the MK VI bearing system differs from the MK V ?

The MK VI bearing system maintained the 6 point contact that was developed for the MK V. We are now using a different material for the 6 calibration set screws. The main advantage of the MK VI lies in the fact that the 6 new precision set screw are virtually inert to temperature change which allows us to calibrate the main bearing system with greater accuracy and closer tolerances. This has a huge and direct impact on the signal  reproduction quality. The MK VI bottom trust plate has been replaced with a polyamide-imide (PAI) high strength plastic with the highest strength and stiffness of any thermoplastic. It has outstanding resistance to wear. The impact of this new trust plate is extremely significant on the sound quality because of its ability to limit the noise generated by the spinning platter. The sonic benefits of the new MK VI bearing system are extremely significant, they drastically revealed with the combination of the MVSS.

How significant is the Micro Vibration Stabilizer System ?

The Micro Vibration Stabilizer System is the single most significant and most efficient improvement made to the Oracle turntable since its creation 35 years ago! The MVSS system represent the final barrier to the elimination of the micro vibrations. This system will virtually eliminate the access of micro vibrations to the most critical part of the turntable, the sub-chassis, tonearm, phono cartridge and platter assembly.

What is the purpose of the MVSS ?

The purpose of the MVSS is to capture and dissipate the micro vibrations that are present within the floating sub chassis without short circuiting the efficiency of the Oracle suspension system. By eliminating the micro vibrations the stylus / platter interaction becomes more accurate, the stylus becomes more stable and better controlled. This increased stability allows the phono cartridge to retrieve more information from the record groove which translates into a more accurate signal reproduction which will not only impact the lower register but the whole spectrum. This global improvement will be very noticeable at all levels: improved musical accuracy, harmonic integrity, transients sharpness, dynamic contrast, tonal balance, depth of image. The listener suddenly becomes more musically involved and this is a very unique experience!

How does the MVSS system control work ?

Beside each suspension tower a small reservoir is secured to the acrylic base. They are filled with an extremely low viscosity silicone fluid. Again, near the suspension housings a threaded stem is mounted to the bottom section of the sub-chassis, those are lining up with the silicone reservoirs, a threaded lock nut and a tapered shape plunger will complete the mechanism. Once the tonearm and cartridge are precisely calibrated, the suspension system perfectly adjusted the turntable is ready to operate. The plungers on each sub-chassis legs are now lining up with the reservoirs mounted to the acrylic base. When in the fully up position the plungers do no come in contact with the Silicone fluid in the reservoirs.

It is then possible to play your Oracle without the MVSS in operation.  Then experiment with the calibration of the plungers by turning them clockwise when viewing them from above. Each full turn  will generate a plunger displacement of 1,27mm (0,050” ). The same calibration should be done for each plunger. Since we are dealing with micro vibrations it is extremely important to lock the plunger in position with the locking ring. Moving the plungers by one turn increments will reveal how they influence the performance. At the factory the best results were achieved between 2 ¼ and 3 ¼ turns. This represents a plunger penetration from 2,80mm (0,110”) to 4,127mm (0,162”) into the Silicone fluid. We also believe that the ambient temperature might have an influence on the depth calibration of the plungers thus each application will require its own calibration fine tuning.

What about the new Delrin adjustable feet ?

In our quest to further increase the performance level of the new Mk VI we did not hesitate to challenge each of the systems we had in place on the Oracle Delphi. Extensive testing and listening test convinced us that the use of Delrin was extremely beneficial to the performance of the turntable. We found the new Mk VI Delrin adjustable feet to provide a better sonic balance with all the different equipment racks it has been tested. This new system further improves the natural tones of the instrument and voices. In fact, it is the whole musical spectrum that is gaining from this new system !

Has the power supply been changed at all ?

We are now offering a very simple but efficient power supply for the Delphi Mk VI. The optional Turbo power supply is the same as for the MK V but the DC cord to the drive module is using a single strand wire. We also experimented with different power cords and found significant sonic benefits.

The original Turbo power adaptor was introduced with the Delphi MkV in 1996. The new MkII is the result of an extensive development and performance comparisons between reference elements such as special batteries and monstrous power sources. All the above outperformed the regular Oracle power adaptor. The Oracle Turbo MkII outperformed them all! It transforms an outstanding performance into a wonderful musical experience. 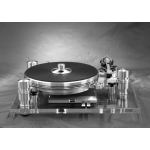 Since 1979, Oracle Audio has been producing state-of-the-art stereo components. Orac..