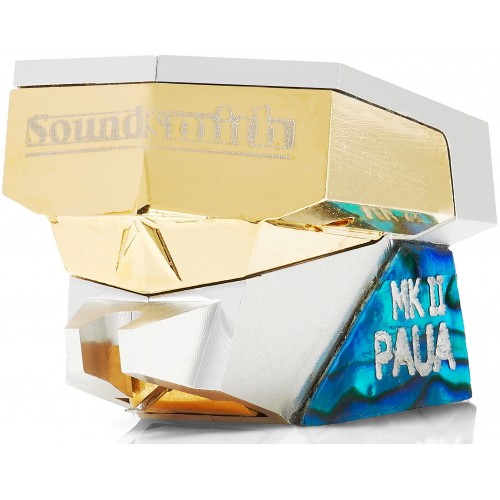 SOUNDSMITH Sets a New Sonic Bar with the ES Series —

“Sometimes you can judge a book by its cover.” – Peter Ledermann.

The ES line features not only a dramatic new look, but is a significant evolution of the DEMS system design (Dynamic Energy Management System). All model names have been preserved, and pricing remains the same.

The new Soundsmith ES cartridge designs are a significant advancement in cartridge performance due to their ability to direct internal vibrational forces without reflection and disperse them properly to the tone arm. The absence of reflections enables the stylus to stay in far greater statistical contact with the groove walls — a critically important technical refinement. Increased liquidity and reduced “grain,” without loss of detail are some of the immediately discernible advantages of Soundsmith’s new ES models.

Every cartridge in the line now features the sleek new ES body design and allows azimuth adjustment when used in tonearms that do not permit it. The new ES body also allows an electrical isolation method for tables that hum due to ground loops.

The upgrade is far more than cosmetic; the new shape is a departure from the reflective and “boxy” design of many cartridges whose internal construction contribute to uncontrolled vibrational issues adversely effecting performance. Peter says, “Think of how singing in an open field compares with singing in a shower.” Soundsmith has always challenged conventions, looking deeper into nuances of cartridge design that dramatically affect immediate and long term performance. These have included extreme reductions of moving mass and the use of novel materials and designs. The new ES lineup is a continuation of that research and development.

Each one hand crafted by Peter Ledermann - Made in  the USA. Rebuild Price? $550 - Less than 14% of MSRP ! ~  The Paua mk II features a 2 year warranty to the original owner.

The NEW Paua MKII: adorned with sea shell to remind us of the beauty of the sounds of the world all around us. Nature healing nature.

The Paua is one of Soundsmith's most highly regarded top of the line low output cartridges. It has won numerous accolades and praise from users and reviewers around the word, including an “Editor’s Choice Award” in 2015 from TAS. Now we introduce the new Paua MKII, employing a newly developed Aluminum alloy used to fashion the MKII's cantilever into a precision acoustic and mechanical lever. It features stiffness in the ranges required, while providing critical damping in other sections of the acoustic spectrum. The reult is an even better Paua, a cartridge that gets raves from its owners, and can be fully rebuilt many times for $550  - a fraction of its original cost - as with all Soundsmith cartridges - 20% or less.

Featuring ultra-low internal moving mass, a specialized telescoping newly developed alloy cantilever and highly polished low mass nude Contact Line stylus, the Paua MKII will add a unique quality of warmth and smoothness to any analog system without leaving behind all the delicate musical details you want and need to hear. The Paua MKII reaches new heights of stylus control and performance, as is confirmed by its incredibly high channel separation figures.

We have accomplished a work of art with the Paua MKII design, resulting in an unparalleled and sublime performance.